I still have the email from the Caveman Foods brand manager:

“Not sure how, but getting some kind of BBQ in the Spicy BBQ would be great. See what you can do.”

I had been fooling around with different variations on the ingredients for the new Caveman Foods Chicken Primal Bar packages. The combinations of ingredients were unusual and intriguing, my mouth was watering. The overall shape of the composition was important, as was the appetite appeal.

The flavor was called “Applewood BBQ.” I tried to incorporate the BBQ concept into it, even putting in some wood. But it wasn’t quite working.

I searched on teh web for examples of illustrations of roasted or cooked food. There was not anything to steal ideas from. I looked at photography of barbequed vegetables. Finally, bought some peppers and roasted them over the stove to see how the burn marks formed. I got it–a formula that I could reproduce in Photoshop. Painting roasted vegetables was a new idea, and everyone liked it. You could almost taste the images. Now we’ll see how the cave men out there respond. 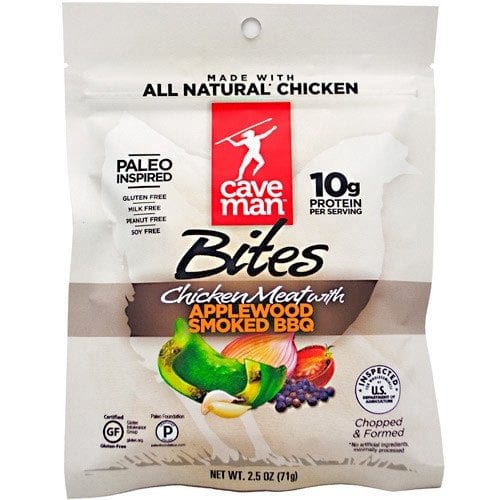